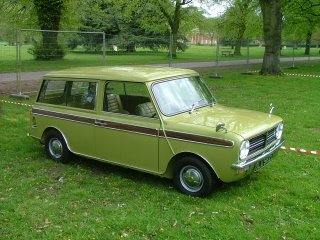 Yoda keeps his complexion by grazing on green green grass.

A few weeks ago, when Liz from the Clubman Estate Register thought the chances of her Clubby passing the audition for Life On Mars

* were slipping away, she recommended Yoda to the BBC and, last Friday, Yoda and I made the epic road trip to Rochdale for the filming, in a rather sorry looking disused hospital building. 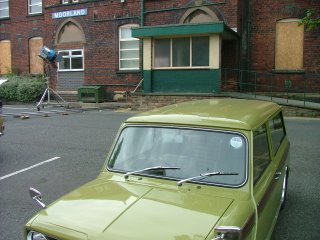 Yoda on location, somewhere in the vicinity of Rochdale.

They only wanted the cars on set from 4pm, so I was saved the extra hassle of getting up at some unearthly hour, but, on the downside, by the time we got there most of the show's stars had packed up for the weekend and gone down the pub. Without leaving any clue as to which pub. I did, however, have the honour of being the first one to show John Simm the caricatures of the cast in this month's SFX magazine, and persuaded him to sign it (well, he could have taken offence!) 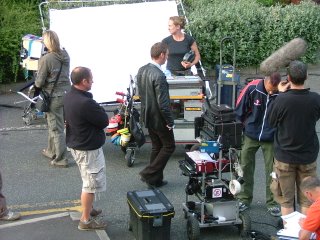 That's John Simm turning his back on me like I'm some sort of crazed paparazzo.

Yoda's scene was an external shot of the Lancashire General Hospital. It lasted about five seconds, but on the plus side, Yoda appeared to have a nice foreground location, so if you don't blink, you won't miss him.

For some reason, Sam Tyler had been barred from the Cortina, and was driving the CID car, which the crew seem to have forgotten was a very similar colour to Yoda. Ooops! 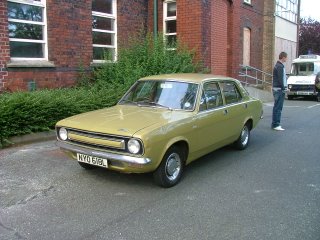 They even give you a period tax disc, but they don't fill it in, so they pinch it back at the end of filming. Tightwads! 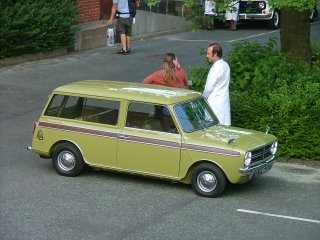 A couple of extras discuss Yoda's early 70s cool. Is she leaning on my car?

Although the drivers of the VW and the ambulance were old hands at this sort of thing and by their own admission a bit blasé about the whole thing, I had never spoken to a TV star in his natural environment before and quite enjoyed the whole thing. Even the sitting around doing nothing, of which there was less than if the vehicles had been needed all day of course. 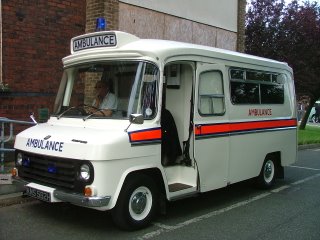 A Bedford CF Ambulance waits for an emergency to happen. 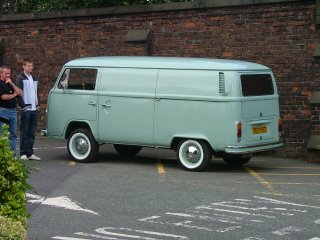 Can you spot the deliberate mistake?

We did get the chance for a quick snoop around some of the interior sets too; I would probably be in breach of the official secrets act if I published any photos of that though.

I even enjoyed the chance to take Yoda out for a real run. Cars like cars used to be - none of this newfangled nonsense like in car entertainment (like a roaring A-series isn't entertaining enough?) and adjustable seating.

Having said all that, I don't think I'd do it again - not for BBC Manchester, anyway. Nothing wrong with working for them, it's just a long way to go. Now, if Doctor Who were to visit the 1970s... pity I would have missed the chance to meet Billie. Oh well. She'd have probably slunk off to the pub before my sceen anyway...

Yoda will be featuring in Episode 6 of the second series.

*Life on Mars is a cop show with a kind of time travel element, which is how I justify wibbling about it here. For those in foreign climes who may not be aware of it, the basic premise is this: Cop involved in near fatal car accident, while in a coma gets a job as a copper in 1973. We get to watch a cool 70s style cop show while at the same time Sam is figuring out why he's gone back in time and how to get home. That's right; Quantum Leap with a car crash instead of a quantum leap accelerator, and a single leap lasting about 16 episodes. Yes, he's even called Sam.

Your website is very beautiful or Articles. I love it thank you for sharing for everyone. Tripyoda travel guide