A few weeks ago I mentioned that it has been 10 years since I became a published writer, and made a vague threat to reproduce that first article here. I'm not going to do that, because it was very specialised and likely only to further alienate the fans of Christian spec-fic who are often disappointed by my coverage of the topic at the best of times...

Instead, here's another little piece I wrote, a potted history of the Mini, which is 50 today!

Accidental legend
When Leonard Lord, chairman of the British Motor Corporation, asked Alec Issigonis to come up with an alternative to the bubblecars that became popular after the 1956 Suez crisis, he expected a practical family car in as small and economical a package as possible.

What he got was a revolution.

Sketching on the backs of envelopes, paper napkins, and at one point a restaurant tablecloth, Issigonis designed the car we now know as the Mini. To keep the car within his target length of ten feet the engine had to be turned sideways, driving the front wheels directly, with the gearbox in the oil sump. This layout is common in modern cars, but was unheard of in the 1950s. 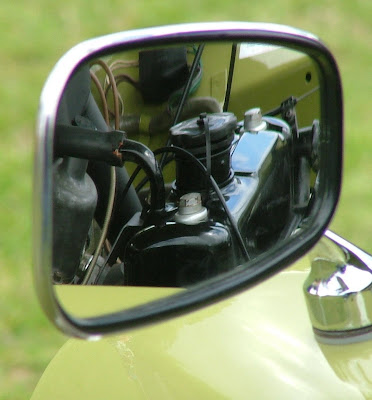 The engine was turned sideways
Everything about the new car was small, from the barely practical boot and tiny ten-inch wheels to the development budget. The developers couldn't even afford to have the cars built on jigs, giving rise to the characteristic external seams. To cut costs further, the 948cc A-series engine, used in the Morris Minor since 1956, was used as a stopgap, although Issigonis declared this too powerful and had the engine size reduced to 848cc before launch. He also had the car made two inches wider, the net result of which was a reduction in top speed from around 90mph to 72mph. 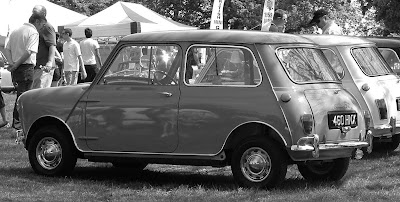 In this form the Austin Seven and Morris Mini-Minor were launched to the public on 26 August 1959. Internal space was maximised by fitting sliding front windows and a pull string door release, and the combined speedometer and fuel gauge sat in the centre of a full width parcel shelf. The seats were designed to keep the driver alert; for the same reason no provision was made for a radio - even later models had these slung under the parcel shelf by the passenger's knees. Such luxuries as carpets were only available on the De Luxe model. 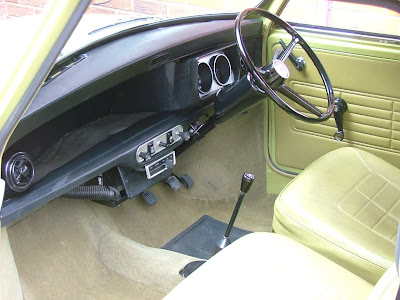 By the 1970s the interior comforts had improved, but not by much...
As the first British small car launched after the Suez crisis, the Mini was expected to take the biggest slice of this new market. However, despite being priced at £496 - its nearest rival, the Ford Anglia, cost almost £100 more - the Mini was not an instant success. Much of the buying public considered it either too revolutionary or too cheap. Those who did try the early models found faults that had been missed in the rush to launch the car - the floor leaked, and because of the positioning of the distributor inside the grille, the engine would splutter to a halt in heavy rain.

However, the Mini was quick, and one of Issigonis' friends immediately saw the sporting potential of its low centre of gravity and wheel at each corner design. Had John Cooper not liked the car, the story of the Mini would have been entirely different. 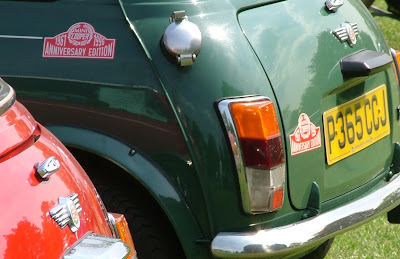 Mini Cooper 35th Anniversary edition from 1996
Issigonis disapproved of the idea of a tuned Mini, so Cooper went straight to the new BMC chairman, George Harriman, and convinced him. A trial run of 997cc Mini Coopers began production in July 1961. At the time John Cooper was best known as Formula One World Champion racing car constructor of 1959 and 1960, but when the initial 1,000 cars sold within a week, Cooper's link with the Mini was cemented.

Minis had been rallied since the beginning, but with the Mini Cooper it gained enough competition successes to warrant further development, and when the Mini Cooper S was launched in 1963 even Issigonis was keen. The Cooper S quickly became the definitive Mini, and has remained so ever since. Between 1965 and 1967, having already earned a reputation as a giant killer, an army of works Coopers took twenty-two overall victories in European motorsport events. 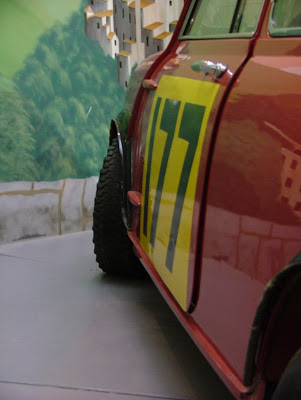 The 1967 Monte Carlo winning Cooper S
Meanwhile, back in Swinging London, the Mini became an essential fashion accessory. Eighty public figures had been lent Minis by BMC to evaluate in the year following the launch, in an attempt to boost the slow initial sales. As a result the car was seen at major social and political events throughout that year - and the celebrities loved it.

Peter Sellers gave the trend for personalising the Mini a kick-start when he came up with the wickerwork side panels seen on his Mini in A Shot In The Dark. Later he took the concept a step further, when Rolls Royce coachbuilders Hooper fitted his Mini with a lifting tailgate - an idea later used by Ringo Starr to accommodate his drum kit. With coachbuilders specialising in luxurious Minis, and pop stars and royalty enthusiastic owners, the Mini had become the classless icon of the sixties. 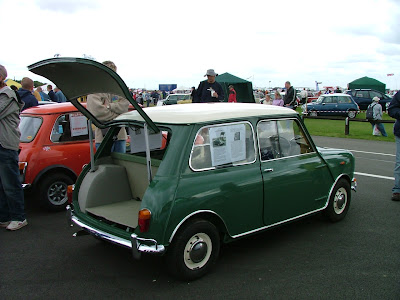 A 1960's Mini hatchback
There was a Mini to suit all tastes and pockets - the Mini and Cooper were joined by van and pick-up variants, and the more practical Austin Countryman and Morris Traveller estate cars. The army rejected the Mini Moke, which went on to become a popular fun car, made famous in the TV series The Prisoner. There were also the up-market Wolseley Hornet and Riley Elf, with extended boots, traditional style grilles and interior luxuries including leather seats and wood veneer dashboards. 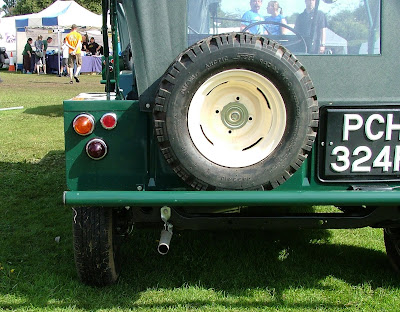 The completely frill-free Mini Moke
Most of these Mini variants were discontinued in 1969, as British Leyland took over BMC. The Countryman and Traveller were superseded by the less charismatic Clubman Estate, and the Mini Cooper was replaced by the Clubman based 1275GT, although the Cooper S stayed in production until 1971. Its glory days were over, but more Minis were sold in the 1970s than any other decade. 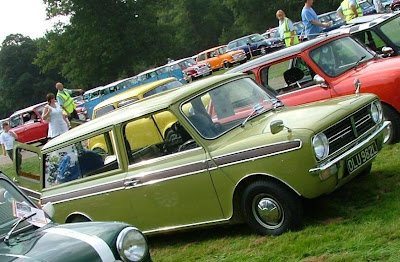 Apologies to Yoda for the 'less charismatic' comment - it was 6 years before we met!
Nonetheless, the Mini's planned replacement, the Metro, was launched in 1980 - and although Mini sales halved that year, shared components between the two cars and the Metro's more efficient production line meant the Mini continued to be viable - even after Metro production ceased.

Forty-one years and 5½ million Minis later, though much refined, the classic Mini shape remained unchanged when the last one rolled out of Longbridge; the external seams were still present, as was the A-series engine, evolved into a 1275cc fuel injected version. 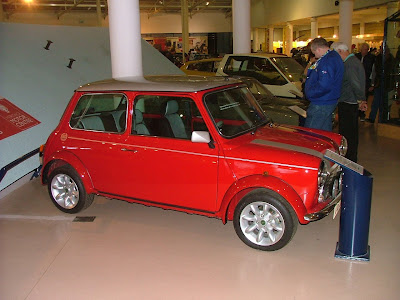 The official 'last of line' Mini
The late Sir Alec Issigonis once said: "My car will still be in fashion after I've gone." From the number and sheer variety of Minis at the recent Mini 50 celebration in Longbridge, it's easy to see how right he was.

This article is (C) Steve Trower, and first appeared in Best of British, some time in 1999. All photographs by Steve Trower.
Posted by UKSteve at 11:20 am