I was planning another artificial intelligence post earlier in the week, but our internet was out for most of a day, so it didn't get finished. Anyway, enough excuses, on with the review! 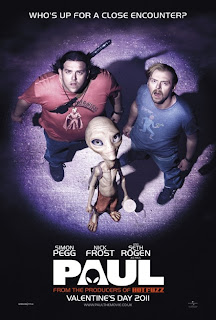 Before I say anything else about this film, I’ll say this: if you get offended by bad language, you’re gonna want to give this one a wide berth. There is a lot of it, to the point of gratuitous swearing being a running gag for much of the film. Much of the gratuitous swearing is therefore deliberately comical, but if you don’t want to hear it, save your pennies.

On the other hand, if you’re a fan of Simon Pegg and Nick Frost, and especially of Spaced, then you’ll get a kick out of this movie.

The writer Clive Gollings (Nick Frost) and Graeme Willy (Simon Pegg) are living every British geek’s dream: a road trip from San Diego Comic Con along the Extra-terrestrial Highway. As is the tradition with road movies, they pick up a motley crew of hangers-on along the way – in this instance a stereotypical grey called Paul, and a similarly stereotypical Bible Belt girl called Ruth. (If Christian-bashing is going to offend you, you might also want to skip the film. If not, we’ll come back to Ruth.) They also pick up a crowd of pursuers, Men in Black, the FBI, Ruth’s dad and his pet shotgun…

So, the film. It’s funny, in a Pegg & Frost way; the pair are perhaps not quite as chummy as in, say, Shaun of the Dead, but the gag rate is high, and the ‘aliens abroad’ theme is completely subverted by having an actual alien having more clue what’s going on than the humans. Paul (voiced by Seth Rogen) gets all the best lines, and a weird love triangle with Graeme and Clive, who almost fall out over hogging the alien experience.

Which brings us back to Bible belt Ruth, who sort of gets in the way of the aforementioned love triangle by wanting to fornicate with Graeme. Yes, her alien encounter brings about a rather abrupt conversion to, well, some brand of hedonistic atheism maybe; or maybe just a belated rebellion against the religion instilled in her by her father. Even Christians in the UK find it easy to laugh at these stereotypical trailer-park dwelling ‘Christians’; I’m not sure how well that will go down in the States, but the character’s of Ruth and her father, and how they interact with the wider world around them, gives plenty of scope for meaningful discussion – Paul hands you one the second he meets Ruth, and there’s plenty of debate to be had, not just about how Christianity would react to alien life, but about fundamentalism done badly, what Christians are really like in real life, the whole miraculous healing thing aliens have evolved, and no doubt plenty of others.

Oh yes, and anyone who was on the CSFF Blog Tour last week might find something familiar about the way Paul does his alien healing thing too!

That said, most of the fun to be had with this movie, is in trying to spot all the geeky references and cameo appearances as the fly past with varying degrees of subtlety. I will be looking out for the DVD in the hope of an homage-o-meter similar to the Spaced DVDs. A lot of fun for the geek in your life!
Posted by UKSteve at 8:33 pm