It is a tradition over at the Daily Audio Bible to take July 7th off, go somewhere beautiful, and spend the day with God. My intention had been to do a slight variation on the theme, and go for a long drive, take the Mini off into the countryside for the day. (The reason for this stems from Wild at Heart, something John Eldredge says about men getting closest to God when they feel most 'alive'; for him it's all manner of outdoorsy stuff, for me, it's a back-lane Mini blast.)

Unfortunately things were not as easy as all that: first there was a hospital appointment on July 7th (for my daughter) which would have taken half the day out. Still, no matter; July 8th was booked off work and the Long Drive was on. Except the aforementioned daughter was taken ill this morning. Not only that, but the rain did not look conducive to a back-lane Mini blast.

Still, as it turned out I was not required to make the trip to see the doctor, and was able to slip off for a somewhat shorter than planned walk, getting myself lost in the rolling hills of, um, Staffordshire. 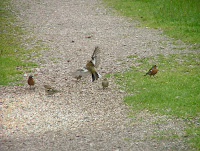 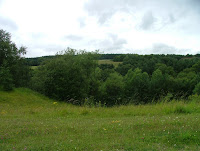 I had no real idea what I was doing; I mean, the theory was simple enough - go somewhere quiet and listen to God. Easier said than done, obviously. But did I come away with anything? Well, maybe, although I'm not sure what it means, if anything.

I found myself surrounded by ferns, and as I looked at the repeatedly dividing pattern of the leaves, it occured to me that the closer you look at a fern leaf, the more detail you go into, the more accurately you can measure its outline, and the longer its outline will be.
Taken to its extreme, you end up with the fractal theory argument that Britain's coastline is infinite. Plainly nonsense in practical terms, but an interesting point, that the closer you look, the more anything - a fern, a country, a person - approaches infinity. At some level, the Infinite is present right at the heart of everything.
Posted by UKSteve at 10:12 pm

Interesting about the fern.
God is revealed in nature in so many ways, every day I see something that makes me realise how wonderful he is.We all need make time to appreciate these things.