Tuesday Tunes: Right Here In This Room by Steve Leach 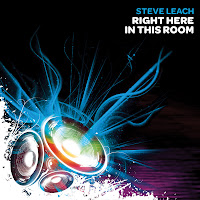 You may not be aware of Steve Leach; he's a DJ from Bournemouth, and his speciality, according to the CD cover, is 'big bass lines, beats and general noisiness, allowing powerful messages to be emphasised musically'. So what we have here is, essentially, a selection of talks by well-known Christian speakers, sampled and remixed over the aforementioned big beats and synth-heavy noisiness.

Right Here In This Room starts out with the fairly low-key 'Free For All', and picks up pace until 'Dry Bones' - Steve Chalke reading from Ezekiel - where the music gets a little more interesting, very much in keeping with the theme of the talk.

Part-way through we get to take a breather with the message-lite, melodic and laid back ‘Do You Remember’, before we're thrown into Cris Rogers' much more excitable, upbeat, talk based from the persepctive of Simon Peter, encouraged to start a revolution by Louie Giglio, and then my current favourite driving track, 'v4'. Verse 4 of what, I still haven't managed to figure out, but it's loud, full of bass and a stirring message: 'What are you gonna pray for? What are you gonna step out of this place to fight for?'

It is the messages that really make this CD. We have Matt Redman telling us that 'He's a good God to have around' (The Way Through), and on 'More?' Louie Giglio's ironic take on asking for God's blessings: 'You don’t even know what to do with what you have!'
If I'm completely honest, Steve Leach is no Fatboy Slim; but obviously you would have heard of him if he was. But in the liner notes he says 'I wanted to lead worship that connected more with the real world in which I live, rather than the Christian bubble in which I spent each Sunday morning plus maybe a week in the summer'. And as someone who would rather spend Sunday morning on a back-lane blast to and from a car show with some bass-heavy beats pumping out of the Mini than singing in church, I'd have to say he connects with my world pretty well too.

Scifi Song of the Week

On a similar electronic tip, but a bit more old skool: it's The Prodigy, taking our brains to another dimension...