Ah, Red Dwarf. I’ve always been a bit of a Red Dwarf geek. I won’t go into the whole back-story right now, you’ve got google for that, but I will share a few thoughts about the first episode, Trojan.

Following Dave’s resurrection of the show in the rather disappointing Back to Earth mini-series a few years ago, they have returned to the show’s sitcom roots, studio audience and all, and in doing so some of the old magic that was missing in BTE was back.

Rimmer was back to his snivelling best (and gurning like a pro), there was some great random banter between Lister and the Cat, and Kryten was… a bit fatter than he used to be, but basically the same old Krytie. No sign of Kochanski, thankfully; a woman’s touch about the Dwarf was ok as a one-off joke, but the chemistry between the four guys was always at the heart of the show. Also no sign of Holly so far, but we’ll see what comes of that later in the series. 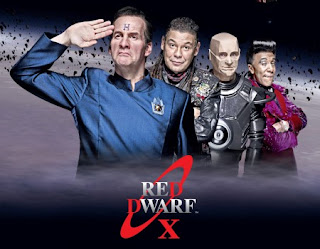 One of the great things about Red Dwarf was that it was always a science fiction series rather than just a sitcom set in space. It used proper sci-fi ideas, and those were back here too.

In the past the boys from the dwarf were often off exploring some long abandoned spaceship, and this week’s example, the Trojan, was powered by a quantum rod, which used the power of quantum entanglement to effectively contract space-time.

It was, in some ways, an episode of two halves, I thought: the first half was the funny half, moose jokes and the like, while the second half dealt with the serious stuff, the science and the philosophy. Yes, you could even get a meaningful conversation started out of this episode if you wanted to - as long as you could stop making moose jokes.

Sure, there were plot-holes if you were that bothered, the continuity from series 8 still remains a total mystery (possibly best to just pretend Red Dwarf X follows straight on from series 6 or 7 anyway), and I'm not sure what I make of the new Red Dwarf set yet...

But, based on the first episode, I think Red Dwarf X looks like being a return to form in terms of humour, chemistry, and science-fiction. And, naturally, the DVD set is on my Christmas list already.
Posted by UKSteve at 10:50 am