In Trojan, a Quantum Rod causes Arnold Rimmer to come into contact with his brother Howard (also now a hologram), a prospect which stirs up the millenia-old resentment Rimmer feels for his better looking, more successful brothers. This resentment manifests itself in the form of self-created malware which overloads his brain and crashes his light bee. 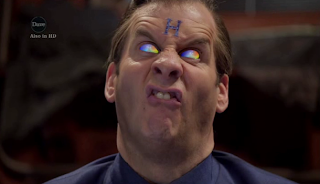 In order to reinstate Rimmer, Kryten performs a resentment drain, after which we get a momentary glimpse of a more pleasant Rimmer, when he realises that competing with his brother won't make him happy.

This better Rimmer is, of course, expanded upon in the character of Ace Rimmer elsewhere in the Red Dwarf multiverse, but for the sake of the plot the old, bitter Arnold Rimmer soon returns. For a moment though, we (and Arnold) see what he could be if he would just man up and forgive his brothers for the perceived wrong they have done toward him; and a perceived wrong is exactly what it turns out to be, when Howard is also affected by a resentment overload, caused by his jealousy of Arnold's (albeit faked) success.

Unlike his brother, however, Howard's change seems to go deeper, to the extent that he willingly takes a bullet for Arnold, and then makes a deathbed confession that he is, in fact, just a vending machine repair man.

And when it comes right down to it, isn't that all any of us are? We are all flawed, imperfect human beings; and we should all be open to the possibility that we are somebody's Howard. We may not be able to do anything about our Arnold, but we can make a start by letting go of our own resentments. By forgiving our Howards, and being honest about our own faults, we can receive a resentment drain and be released from the burden of bitterness.

And who knows, we may even discover our inner Ace. Smoke me a kipper...
Posted by UKSteve at 9:50 pm