So, before wrapping up for Christmas, just time for one final Friday review.

2007 was a year which started out promisingly, started out with sci-fi related commentary, and then wandered off into sub-plots about music and old cars. Personally I think that made it a bit more interesting (and colourful) than 2006, but I think I'd like to see a bit more sf in the sequel (working title: 2008).

There was an interesting sub-plot involving Her Babyship in the middle, which was largely in the background (and comments) but which obviously distracted the protagonist while it was going on. It was an emotional rollercoater, but reached a satisfying (if unrealistic and cheesy) conclusion when Her Babyship took her first faltering unaided steps on her second birthday.

Back to the sci-fi: Robin Parrish and Austin Boyd found their way onto the reading list via the CSFF blog tour, where they joined classics by C S Lewis and Mary Doria Russel.

On the telly front we had the Doctor's best season so far, the slow and ultimately disappointing Primeval, and the last couple of seasons of Angel on DVD. Finally. Oh, and of course Life on Mars, with all its attendant Yoda-shaped goodness.

Writing seemed to suffer from the Babyship crisis. Early promise of Hitchhikers inspired blog posts and some original fiction went unfulfilled, but things did pick up again towards the end: I started a (non-sf) novel, finished a short story (but was never happy with it) and started a couple more. I even got an article published (admittedly a butchered version of one I wrote a decade earlier).

At least that all leaves some loose ends to be tied up in 2008. Until then, have a merry Christmas and a peaceful New Year.
Posted by UKSteve at 10:05 am 1 comment:

These pictures are from the Christian Mini Owners Club stand at the London to Brighton Mini Run in 2001. Find out more at whatwouldjesusdrive.org.uk. 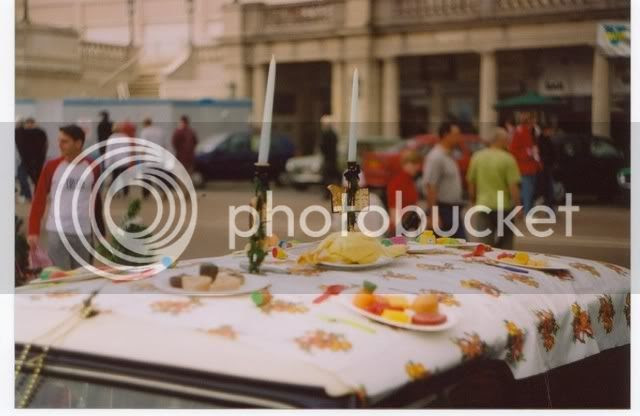 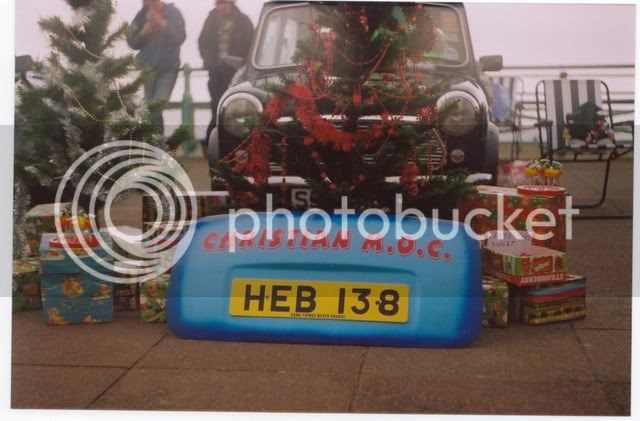 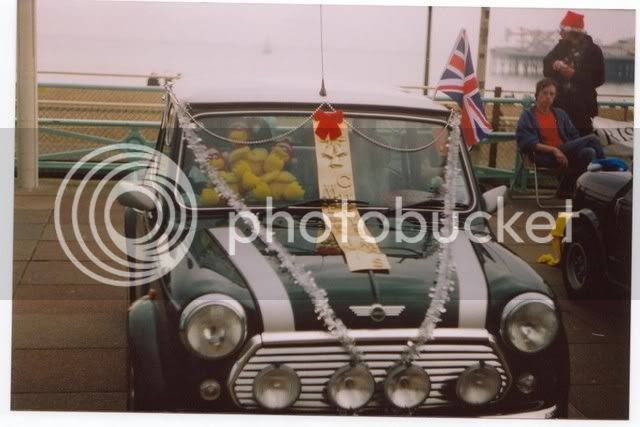 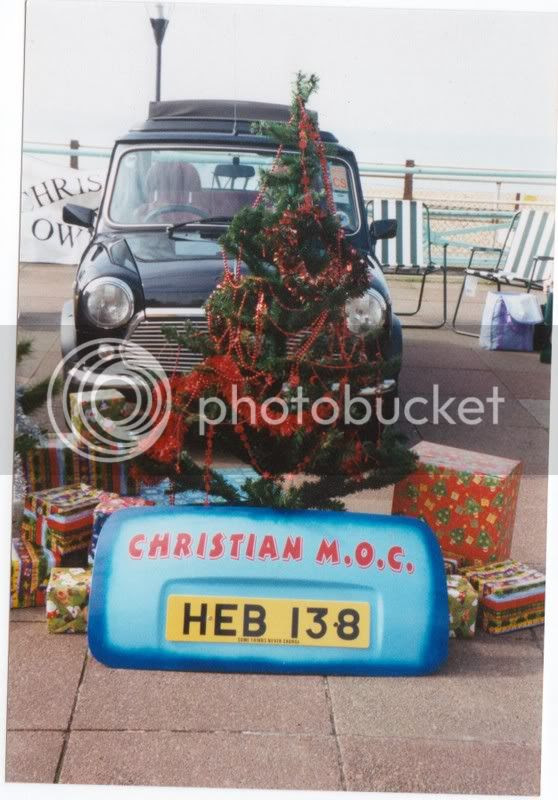 That reminds me, I really should get that Christmas tree up...
Posted by UKSteve at 11:56 am No comments:

I think I've mentioned here before that I'm rediscovering the short story as one of science fiction's strong points - just throw an idea out there, give the reader something to think about, and end the story before over-cooking it.

I've been in my car a lot lately, and listening to a lot of fiction (mainly sf) podcasts while driving, and as a result I've had a lot of recent exposure to some great stories. I'd love to say that those on Wayfarer's Journal easily match up to the best, but from what I've sampled I can't honestly do that.

That's not to say there aren't some good stories on the site - there are, and I'm getting to that point - or that I could do better, because I probably can't (although I may well try). But I've been listening to Hugo nominees, stories published in Asimov's, and other well practiced and respected authors. Wayfarer's Journal is a new market, and can't be expected to match that. Hopefully as it gains readers and contributors (helped along by this tour) the ideas, story telling, and editing will all improve.

As an aside, there has been some interesting feedback on some of the stories during this tour(reviews by Steve Rice, John W Otte and Mir have highlighted some areas for improvement, for example) and I would like to see some form of reader feedback on the site, so the writers and editors can try to give the people what we want.

Now, the good stories. I don't think anyone on the tour has commented on Me That I Am by Dale Hansen yet, possibly because it's not a current story. I haven't read all the stories available yet, but this has been my favourite so far. It is the tale of one man's journey into faith, a journey facilitated by a uniquely sci-fi device which 'the bright minds of our time are calling an “Event Threshold” and whispering it’s name like they’re afraid it’ll hear them and show up'.

Oh yes, it's got humour too - those bits which may have wandered into As you know, Bob territory are packaged in lines like 'the mathematics of the whichness of where could drive a man to drink tea.'

I don't even care that some of the sentences didn't trip off the tongue that easily. Or that I had to keep mentally changing where into were for the thing to make sense. Me That I Am took a nice sf idea, wrapped it around a spiritual journey, and sprinkled it with lines that just tickled my sense of humour. That is enough for me to want Wayfarer's to go on to bigger and better things.

I would have liked to have posted a Christmas story somewhere by now, but life has gotten on top of me again (pesky life) so I haven't done. Maybe next year?

Instead, I bring you the final instalment of my festive Tuesday Tunes offerings. Christmas has, for a long time, been a time for me to discover new music. It's got even better lately, with the facility to amble along to a download store, type in 'Christmas' or 'Santa' and see what novelties come up.

This isn't one I discovered that way, though I guarantee it will be new to many of you. It has become almost as traditional as White Christmas or Santa Claus is Black in our house since I first heard it played by the late, great John Peel, probably 15 or so Christmases ago.

SciFi Santa Song of the Week

Space Christmas by Shonen Knife.
Yes, there I go again - pop-punk guitar music with girly vocals and an accent (this time Japanese). I downloaded it a year or two ago, though I can't find it available now. Check out the samples at amazon instead:
Posted by UKSteve at 2:44 pm No comments:

A lot of the time the subject matter of this tour passes me by, because I don't do fantasy, and there seems to be a lot of that around. So I am particularly glad to say that the tour has pointed me in the direction of Wayfarer’s Journal recently.

Wayfarer's Journal is an e-zine for 'science fiction with a difference' - by which, obviously, they mean that with a spiritual dimension. And the author's guidelines are quite specific about wanting science fiction only. So if you're on this tour only for the fantasy, well, you probably know better than to read what I have to say most of the time.

There have only been a couple of issues so far, and the plan is to remain semi-annual (it says February and June, but the most recent issue is called the Fall Issue... ) with little features in between, and an ongoing blog.

Apparently there have been some technical difficulties lately, and when I last popped in there was at least one story missing, but hey, what website doesn't have occasional glitches?

I'd like to have more time to comment on some of the stories, but there's work to be done. And I haven't even got the Christmas tree up yet. (Christmas? What's that?) Hopefully I'll get round to it later in the next couple of days. And then maybe I'll post on the tour again too.

So, I was rooting around my favourite download sites for tunes for my latest Christmas compilation, and I came across this. I look forward to terrorising the in-laws with their manic interpretation of 12 Days of Christmas ('Whats a partridge?/And what's a pear tree?/ I don't know so please don't ask me/ but I bet those are terrible gifts to get') and We Wish You a Merry Christmas, followed by the shouty pop-punk 'I'm Gettin Nuttin' for Christmas' and then alarming them with Handel's Messiah in the style of a soccer terrace chant with rock guitars, Good King Wenceslas in the style of bad carol singers, and the post-Christmas melancholy of Boxing Day.

And then - and only then, because it's more fun that way - I will reveal that this terrible band with their loud guitars and stupid lyrics are, in fact, good Christian boys. I can hear the scoffing noises of disbelief now... until I skip to the sublime I Celebrate the Day. That'll shut them up.

Seriously, if you only download one Christmas song this year, make it I Celebrate the Day.

Sci-fi Santa Song of the Week

If that wasn't enough Christmassy rock fun, see if you can track down a copy of I Want an Alien for Christmas by The Fountains of Wayne.

Posted by UKSteve at 8:42 pm No comments:

Posts are a bit thin on the ground here at the moment, mainly because the pesky day job keeps dragging me across the country for one reason or another. Tsk.

Still, those nice bloggers at The Sci-Fi Catholic tagged me for this, so I figured that since it saves me actually thinking too much I'd take a stab. So here are 8 (count 'em) random facts about moi:

1. My fourth car was a Mini. Yeah, my first one was too, but that sounded a bit predictable and not at all random. My second and third cars (and fifth and sixth) were Minis too.

2. I don't currently own a Mini though. Technically Yoda belongs to Mrs UKSteve.

3. I've gone off the idea of progress. It's over-rated.

4. I have an annoying tendency to quote The Hitch-hikers Guide to the Galaxy whenever the opportunity arises. Also Red Dwarf and The Italian Job if they are more suitable.

5. I have read His Dark Materials. Yes, the whole trilogy.

7. One of my first published writings was a witty little thing called '101 Things to do with a Kettle'. The sequel, '101 Things to do with a ZX81', was far better in my opinion, but due to the more limited target audience I have yet to make a fortune from it. I made a couple of half-hearted attempts to put it online, but never quite found the right format.

8. I don't think this blog has eight regular readers, especially not eight that haven't already been tagged by DGD and his blogging pets.

So, if you happen to be passing through and haven't done the 8 Random Facts meme yet, consider yourself tagged.

Actually, that was quite fun.
Posted by UKSteve at 9:11 pm No comments:

It's an interesting phenomenon (possibly) that a lot of things that I would try to avoid most of the time become strangely palatable around Christmas. Like mince pies - I don't really like them, normally, but can't help myself come December. And a more common example, of course: sprouts.

And as far as tunes are concerned, there are, I think, three Cliff Richard numbers on high rotation during the festive season. That would be a frankly alarming propsect under normal circumstances, but Christmas without Cliff just doesn't seem right any more.

A slightly more bizarre variation on this theme features as this week's Sci-fi Santa Song of the Week: A Spaceman Came Travelling, by retired bin man Chris de Burgh. Completely mental nonsense about a spaceman who travelled for light years of time to bring a message for mankind to hear. Utter drivel really, but hey, it's Christmas, peace and goodwill to all men. Even Cliff and the de Burgh fella.

Posted by UKSteve at 9:17 pm No comments: