Honestly, I was going to write a half-sensible post about Venom and Song yesterday, but I've been having trouble with blogger for some reason :(

All being well I'll have something interesting to say (and the technology with which to say it) tomorrow. It may or may not have anything to do with Spiderman, Doctor Who or the Berinfell Prophecies.
Posted by UKSteve at 4:04 pm 1 comment:

Imagine my surprise when I realised, having visited a few sites on the CSFF Blog Tour, that Venom and Song

actually has nothing to do with Spiderman's nemesis or Doctor Who's mum, but is in fact the sequel to Curse of the Spider King

So with that in mind, and while I go off and hurriedly re-write tomorrow's in-depth study of the enigmatic River Song, allow me to cop out and reprise the Top Ten Spider Songs from last time we toured Batman and Hopper. Batson, sorry.

10. Barenaked Ladies: Spider In My Room

Ah, obscure album tracks. Where would we be without them? Looking at the top five spider songs, probably...

9. The Mission: Spider And The Fly

It wouldn't be a Spidery Top Ten without some nice goth rock now, would it?

I may have mentioned before that I like Hawkwind's brand of psychadelic space rock. This is from the brilliantly titled album Hall of the Mountain Grill.

Time for a change of pace, and today's dose of electronica, which has R2-D2 on guest vocals. Probably.

6. The Who: Boris The Spider

Apparently this as Jimi Hendrix's favourite Who song. It must be true, it's on the internet.

5. Alice Cooper: I am the Spider

He's not The Spider, he's a very naughty boy.

Mmmmm, mellow. It's from a film about a French footballer you know.

OK, I know spiders aren't insects, but the extra two legs make them like royalty to all the ants and such. But it was too close not to top the charts, especially as the album, XTRMNTR, is one of the Scream's best efforts.


And if you made it this far, let me remind you again that the CSFFBT special offer price for Countless as the Stars will be available for just a few more days. Buy now for Christmas!
Posted by UKSteve at 8:16 pm 1 comment:

This week, along with the Christian Sci-Fi and Fantasy Blog Tour, I will be highlighting one of the more bizarre double acts in speculative fiction of recent years, Venom and Song

The story of how Spiderman's arch-nemesis and that mysterious woman out of Doctor Who were put together is something of a Cinderella meets X-Factor story, Venom having been discovered on a talent show by music mogul Christopher Hopper, while River Song was (allegedly) romantically involved with Hopper's partner in crime-fighting, Wayne Thomas Batman.

It was during a tortuously long corporate meeting discussing how a DC hero and a Marvel bad guy could possibly live together in the same universe, never mind harmony, that River Song entered with the sandwiches and spontaneously broke into a beautiful rendition of Superman's Big Sister

, shortly to be joined by Venom for a duet of I Knew You Were Waiting (For Me)

The rest, as they say, is history; Batman and Hopper have officially given up the crime-fighting lark while Venom and Song record their debut album Berinfell, which will be out for Christmas with an accompanying single, Christmas With the Spider King.


While we're here, let me remind you that the CSFFBT special offer price for Countless as the Stars will be available for just a few more days. Buy now for Christmas!
Posted by UKSteve at 6:34 pm No comments:

Who is This God Person Anyway? (Fit the Seventh - The Fall)

I haven't done one of these in literally years, and Becky's recent post about the risk of a Christian author's work turning people away from God just reminded me that it's actually quite fun to deliberately do the exact opposite...


Arthur listened for a short while, but being unable to understand the vast majority of what Ford was saying he began to let his mind wander, trailing his fingers along the edge of an incomprehensible computer bank, he reached out and pressed an invitingly large red button on a nearby panel. The panel lit up with the words Please do not press this button again.

(The Hitchhiker's Guide to the Galaxy)

Similarly (well, similarly enough for the purposes of a blog post anyway) Eve, being unable to understand the vast majority of what God was saying, began to let her mind wander, reached out and took an invitingly large red fruit from a nearby tree...

OK it's a flawed parallel, not least because, unlike Arthur Dent, Eve had been warned of the consequences before she took the fruit. Arthur was technically tempted by the unknown rather than the explicitly forbidden, although I think a good rule of thumb would be that if you've never been in a spaceship before, pressing buttons as soon as you get the chance is not going to go down well with the spaceship's owners.

So, let us suspend our disbelief for a moment and agree that the temptations were broadly similar, and take a look at the outcomes. Now, poor old Eve, she would have been straight out that air-lock, snatched away from her space-borne Utopia with President Beeblebrox and made to fend for herself in the big wide universe. What does Arthur get?

To my thinking, that polite little warning the Heart of Gold gives him seems even more tempting than an unmarked red button. But he is given a pause to reconsider, reminded that buttons is spaceships are not there for the entertainment of earthmen, and asked not to do it again. He is given the Sirius Cybernetics equivalent of grace.

How many of us, when God's Heart of Gold tells us not to do something, think 'Well that wasn't so bad. I wonder if I can get away with it again...'? How many times can we press that button before the airlock opens and we, too, are snatched away from the Heart of Gold by certain death? 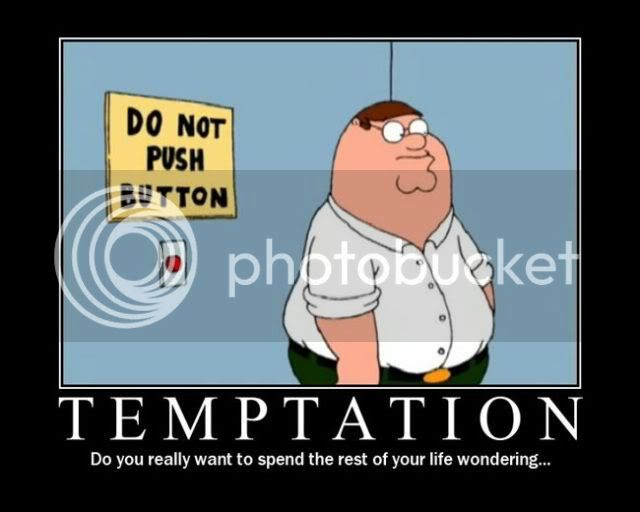 Hat tip also to Exploring Our Matrix for inspiring this post, and (indirectly) for the image :)
Posted by UKSteve at 2:31 pm 2 comments:

Labels: DNA/HHGG, Who is This God Person Anyway?

News from the podosphere

OK, a couple of items of note from the podosphere (which, if you look, is just across the cyberstreet from where you are in the blogosphere):

First, Adventures in Sci-Fi Publishing 2.0 has been up and running for a couple of weeks, with an improved website and regular podcasts. Not sure about the new cheesy music, but the talky bits are usually worth a listen (and the next season of Stargate Universe sounds well worth a watch too!).

Second, and more importantly, it somehow slipped my attention for about a week that Starship Sofa, which for some time has been all flushed with excitement at being the first podcast ever nominated for Hugo award, only went and actually won the thing. So congratulations to Tony C Smith and the Sofa crew, and to both my readers, get on over and have a listen some time :)
Posted by UKSteve at 7:10 pm No comments:

OK, so it's a bit retro now, but I've been catching up on some TV and movies lately, and slightly irreverant movie reviews are quite fun (and fill blog space). I guess most people with a vague interest will have seen it by now, so I won't waste too much time, but I will share a couple of thoughts with anyone who cares to read them.

Now, I'm no comic book or superhero expert, but I am reliably informed that the recent crop of superhero movies have been (on the whole) a lot better in terms of faithfulness to source material than a lot of earlier ones. Certainly the previous Batman franchise started off ok (the one, I believe, with Buster Keaton in the title role) but deteriorated into camp naffness. Batman Begins, on the other hand, gives a lot more time to developing Bruce Wayne as a character, and showing how he became Batman. It's quite a dark movie, and Batman is a hero with a dark side, but because we understand Wayne's back story, that is not gratuitous, and is exactly how it should be.

So we meet Bruce starting fights in a jail in the Himalayas, either by choice, or because he is truly lost, according to Merely Ducard, a stranger who turns up and invites Wayne to join the League of Shadows. The League follows a code which upholds the natural order of things, unbound by the hypocrisy of corporate Gotham City. And who, lost and in search of purpose, wouldn't be tempted to follow such a code?

It is during this journey that young Bruce, challenged to help the League destroy Gotham City, discovers the importance of compassion and decides instead to save the city; the vengeful nearly-villain becomes the hero and saviour of the city.

Batman Begins is a story of greatness (and goodness) coming out of tragedy and evil. It's a story of salvation, both of Bruce Wayne and Gotham City. It's a top-notch comic book/superhero flick. And it's got Charlie Croker in it, which can only be a good thing.

Posted by UKSteve at 4:52 pm No comments:

How did that happen?!

I am reliably informed that it's September now. Autumn is coming. Back to school. The end of season Mini concours finals. And only two months to November.

So September 2010 for me means NaNoPrepMo; the start of preparations for National Novel Writing Month. Two paths lay before me: use NaNo 10 to finally make some progress on the almost legendary Project Seven; or another weird and wacky eight-bit adventure like I had such fun with last year.

Setting out to write something fun and a little bit silly is, perhaps, the easy option - last year's NaNo was crammed full of NaNo in-jokes and self-referential nonsense, but it didn't matter because it was supposed to be a humourous story. So doing another comic novel means I won't be worried about it taking a turn for the utterly ludicrous.

Project Seven, on the other hand, is a serious project. It has a serious subject matter. It has been on my heart to write this for some time (as regular readers may recall), and until I hear otherwise, I believe God wants me to write this book. But it has been extremely difficult, hence not yet having made it beyond a few notes, ideas, and false starts. I have resisted using this as a NaNo in previous years because I wanted to do it justice; this deserves to be more than a hastily knocked up third-rate short story with lots and lots and lots (getting into the spirit already) of padding.

But... Rule One of NaNoWriMo is that none of that matters. Just write! And maybe that's what I need to do. Maybe the only way I can make any progress with Project Seven is to force myself, through the medium of NaNo, to write something, and hope that it finds it's intended shape during the course of the month. (This is, in fact, what happened with my two successful NaNo's.)

NaNo rules allow for planning and preparation before November, but no actual writing. So I have two months to sift through all my notes, ideas, and half-written chapters for Project Seven (I promise not to just use them!), get myself some kind of rough outline, and do any other preparation I can...

Sorry, I've rambled... but that's why I'm a writer, my mind processes things like this as I write them down. I think I've just talked myself into doing Project Seven for NaNo... NaNoWriMo updates will be starting soon!
Posted by UKSteve at 7:26 pm No comments: