Aaaargh, only a few days to go and so much still to do!

OK, it’s actually just an excuse for another retro review, but hey, how long will it be before somebody googles that exact phrase? (If that was you, by the way, welcome!)
So, Transformers then. Big action movie, fun special effects, every Hollywood cliché in the book, Megan Fox as eye-candy, and a happy ending. If any of that tickles your fancy, you probably saw this already, and if it doesn’t, you don’t care. So why, I hear you ask, are you blogging about a movie whose sequel has already been blogged to death?
Well, out of curiosity as to what the greater Christian public actually makes of films like this. There is, it must be said, a lot of good stuff in the movie – as with any good movie of this kind, the heroes are there to demonstrate self-sacrifice, justice and defending the weak, as well as looking cool and kicking Decepticon butt. This is all good. There is a lot of violence and reckless destruction of stuff, but it’s all cartoon violence, there’s no gory stuff and the body count is not excessive. Our hero, Sam Witwicky (Shia LeBeouf) is an ordinary teenage guy, who just wants a cool car and a hot girlfriend. Although some may consider this shallow (and rightly so), it’s also realistic. That’s what teenage guys want out of life. OK, so I generalise, but that’s a moot point, as during the course of the movie Sam discovers more noble traits like friendship, honour, and bravery, and generally matures over the course of the movie. Again, all good.
Although some Christian reviews I perused took issue with Sam’s shallowness, there did seem to be a problem with the sci-fi elements. In the movie, the good and bad Transformers are looking for the ‘AllSpark’, the means by which they were given life. It seems to me you can take this one of two ways; either it’s an allegorical version of God, or it’s a grotesque blasphemy. As this is just a story, surely it would be better used as an allegory, a way to teach children about the creation of man, than blamed for encouraging them to grow up worshipping robots? Yes, kids will want the toys, yes they will fantasize about worlds inhabited by shapeshifting robots, but I expect most will know it’s not real. And really, is there anything wrong with imagining – or even believing in the possibility – that God created life elsewhere than on this random chunk of rock we call home? And, at the risk of leaning towards the grotesque blasphemy, that such life may be completely unlike ourselves? I guess I’m just biased though.
Oh, yes, you were wondering when I would get to that bit weren’t you? Yes, there is an awkward scene where Sam’s parents think they’ve caught him masturbating, and a conversation about his special alone time ensues. Yes it was unnecessary for the plot, and unsuitable for children of a certain age, but films have ratings for a reason after all (in the case of Transformers, 12/PG-13). I suppose it may have given the teenage audience a slightly embarrassed moment of humour, but in its defence, the moral outrage it caused among Christian movie-goers probably saved the sci-fi elements from more of a bashing.
My take? Sam is a teenager. OK, most mums wouldn’t tackle the subject quite the way his did, but treating it as taboo, and calling it the ‘M-word’ in your internet review, are not going to make it go away. I don’t have the answer, but in our increasingly sexualised society (see Mikaela in this movie for an example) we shouldn’t be walking out of films that mention it, and we shouldn’t be ignoring it.
Hence, I suppose, my title for this post :)
Posted by UKSteve at 7:15 pm No comments:

And I'm starting, slightly, to panic. I haven't done half the things I needed to do before November 1st, the outline for the story keeps changing, and something else is bound to go wrong because these things always sound better in threes.

So, NaNo'10 is going to be the much anticipated first (complete) draft of Project Seven. It had a working title, but I think the story may be going off on a different tangent before I start, so even that may change. In fact, if I can think of what Project Seven actually is, maybe I'll even call it that.

I do have a protagonist: Benedict Brown is about to turn 40, and over the course of 50,000 words, looks back at the complete pig's ear he has made of his life. I know, sounds like a pretty uninspiring mid-life crisis story so far, but what he has done with his life is a story that needs to be told. There will be a catalyst for this introspection other than the impending anniversary, and this may or may not be an interesting plot point.

There are other characters with related stories, but I will concentrate on Ben for this NaNo; the others may appear briefly, or they may be written in afterwards. They may even have entirely different stories, say for NaNos '11 and '12.

Wake me up when it's Octomber

I might be being just a little bit paranoid, but I have a slight suspicion that this email I received today may not be 100% genuine... 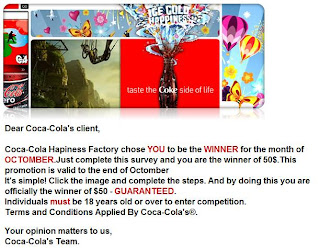 On the plus side, if you can read this, it means I've sorted out the technical difficulties I've been having with blogger and will be returning to pester your rss aggregator again soon :)
Posted by UKSteve at 4:17 pm No comments: